Every year, “the linen bird” produces a year towel to express their gratitude for the year and best wishes for the New Year. The theme of 2016 towel is “Different colors for different people.” This towel is a complimentary item at the envelope online shop that comes with every purchase over 20,000yen including tax.

A tea towel that can be used for wrapping

Each year, the linen bird staff take turn acting as director of year towel production.
In order to deliver the year towels to our customers by the end of the year, the directing staff decides the theme, designs the towel, selects the fabric and communicates with craftsmen and manufacturing plants.
This year Ms. M of the Futagotamagawa shop is the director.

“I like the soft atmosphere that linen has when letting light pass through it and its soft texture. I wanted to design a towel with illustrations on both sides that match and look like one design when the towel is held up to the light, and so I came up with the idea of a double-sided print.”

The theme of the 2016 year towel is “Different colors for different people.”
The design that appears by matching the illustrations printed on both sides of a towel means that the inside of people and things is invisible at the surface and expresses that everyone is different.

Ms. M also wanted to make a towel that can be used not only as a tea towel but also as a wrapping cloth.
After drawing a design, she visited Art Saratetsu, a stencil dyeing studio, to request production of the towel.

(Form the upper left) Fabric is strained at a 13-meter long base and dyed. Aligned round brushes made of deer hair. Stencils used in the studio in the past are stored. Cloth hand-painted by a craftsman

Consultation with a craftsman

Art Saratetsu was founded in 1910.
This company is the only place in Tokyo that dyes fabric with the Japanese “yuzen” technique.

First, Ms. M showed the craftsman the towel image.
While consulting with him, Ms. M selected the type of fabric and dyes, and revised her design in order to allow the back to be seen through the front when light passes through the towel. 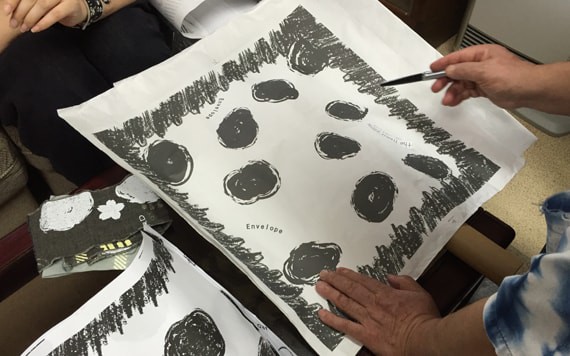 After experiencing whether or not the print could be firmly fixed on the fabric, Ms. M decided the type of linen to be used.
She decided to make 10 colors of towels. 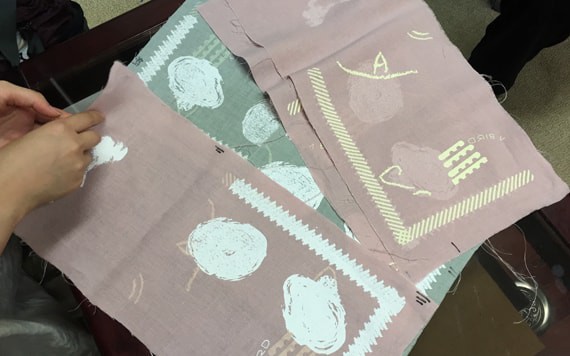 All of the 10 types of fabric are linen, but the colors and how they have been woven are different from each other.
The dye condition of each fabric was different and thus the colors of the dyes needed to be adjusted.
Ms. M decided to use a gray dye for the towels, but the gray color looked weak against navy blue fabric and looked strong against white fabric.
The craftsman’s technique was necessary to create a color that looked attractive against any color. 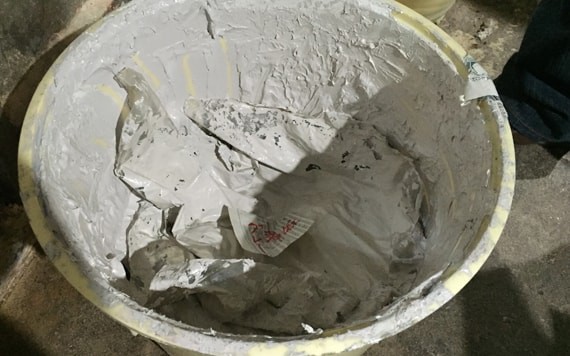 The craftsman mixed pigments with dyes to make gray. The dye was blended so as to make the color look attractive against any color and so that it would not fade out.

After making a stencil based on Ms. M’s design sketch, the next step was dyeing the fabric.
All double-sided printing processes were manually performed.
Each fabric was strained at the base and dyed. 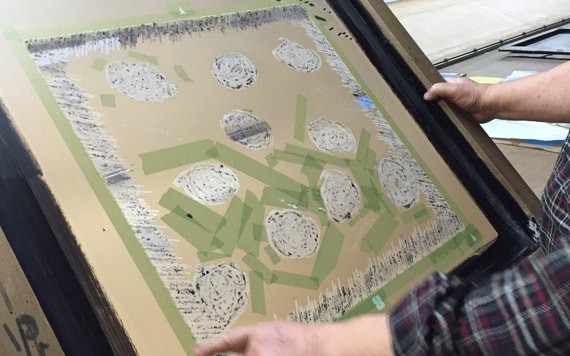 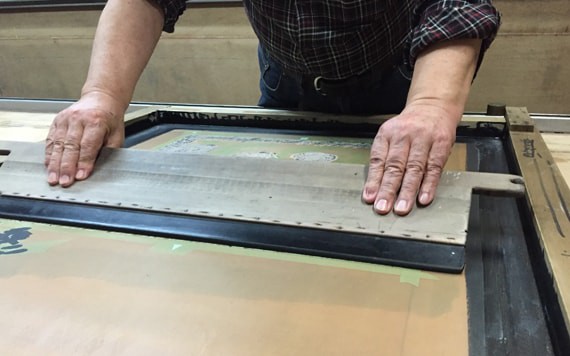 After drying the dyed fabric, the craftsman turned it around so that the front perfectly match the back and then placed the stencil on the back side.
The fabric was removed from the base, steamed, and then dried again.

We wrap our gratitude for the year in the towel.

After the dyed fabric had been made into towels in a sewing factory, they were delivered to the linen bird shop just a few days ago.
Looking at the towel by the window, we can see that the front and back prints match and look like one design.
It turned out just as Ms. M envisioned it. 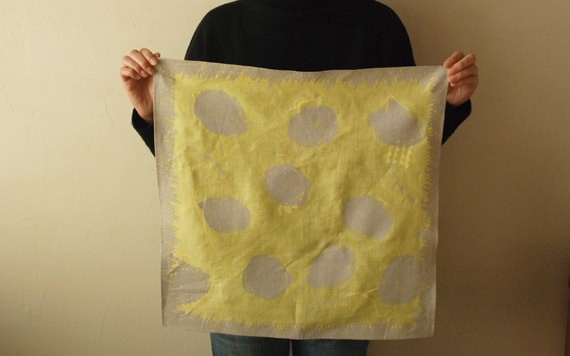 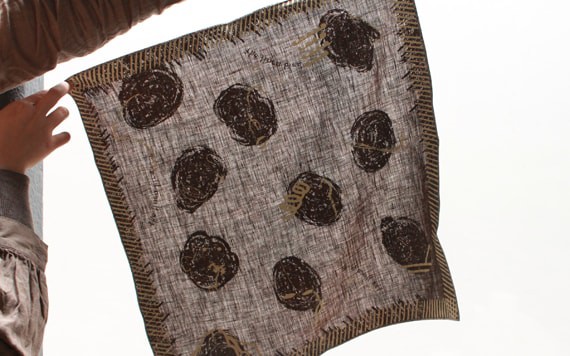 When looking at the front, the design looks like 10 different shapes of lumps.
As the towel is held to the light, various faces appear.
A calm-looking person, a happy-looking woman, an old man who looks both stubborn and wise and a monkey, the animal symbol for 2016 according to the Chinese astrological calendar. There are different colors for different people. 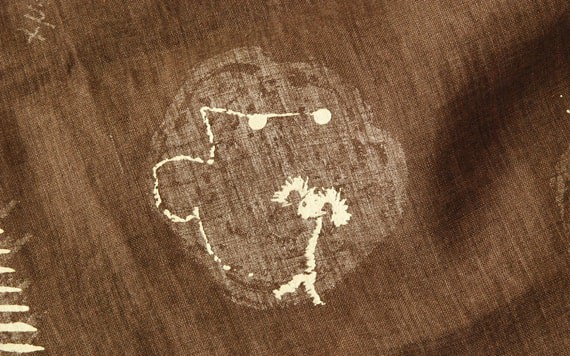 A monkey is hiding somewhere. 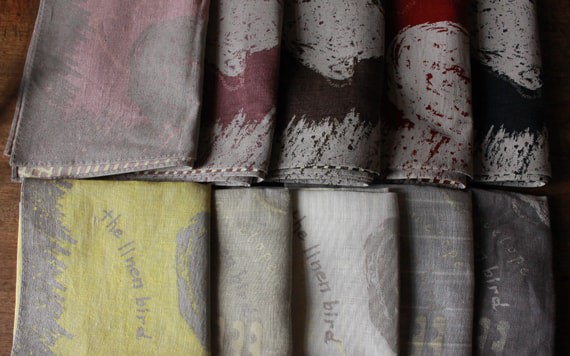 Vivid red, tranquil navy blue and cheerful yellow. Each of the ten colors has a different atmosphere.

Our 2016 year towel was produced by combining the linen bird’s concept and design with a craftsman’s technique.
We will deliver our year towels to you along with our gratitude for the year. 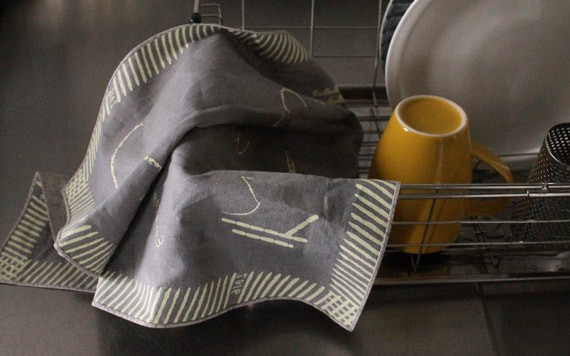 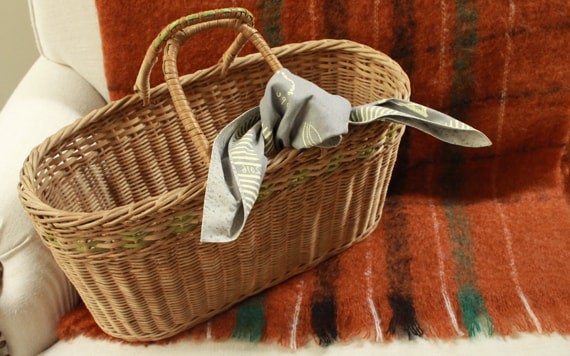 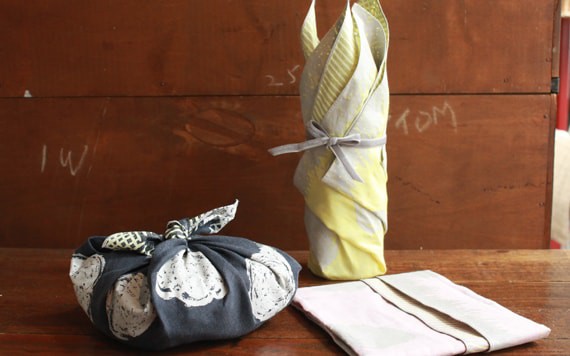